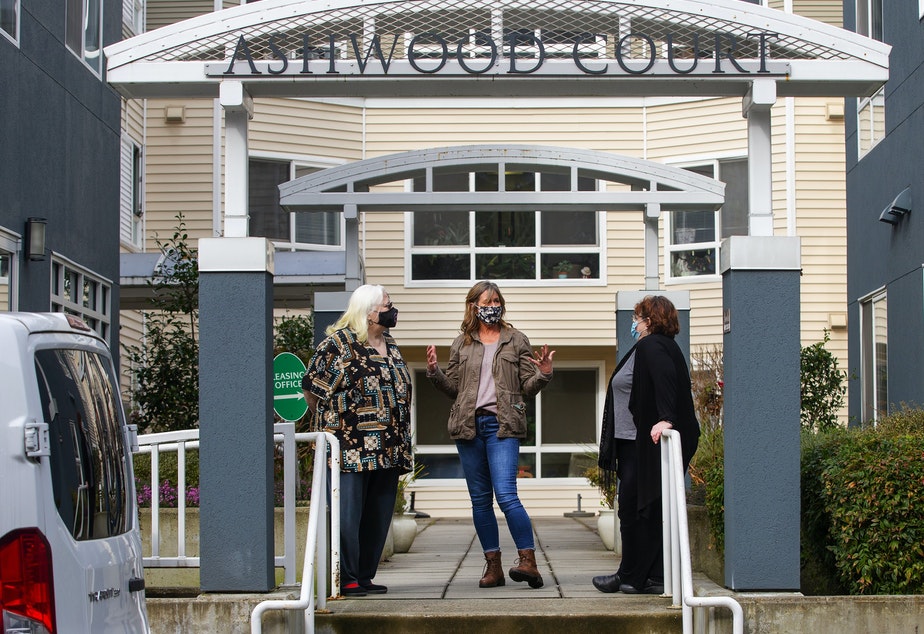 By Kim Malcolm and Andy Hurst

A series of legal battles are being waged in courts around the country over a decades-old federal program designed to protect affordable housing. Private firms are now trying to leverage it for profit.

That’s putting the future of secured housing for low-income families in doubt. It’s having a big impact in the Puget Sound region. WBUR’s Senior Investigative Editor Christine Willmsen has been reporting on the issue. She told KUOW’s Kim Malcolm what’s going on.

Kim Malcolm: Can you give us a quick primer on how this tax credit program is supposed to work?

Christine Willmsen: This is one of those programs probably not too many people have heard of. It’s called Low-Income Housing Tax Credit. It’s designed to promote the development of affordable rental housing. Under these deals, typically, a nonprofit forms a partnership with an investor. The investor gets tax credits in exchange for giving money to either renovate the property or build it.

At year 15, though, the nonprofit generally gets the right or the option to buy the investor’s stake, taking ownership of the property and getting it at well below market value. Usually, banks and investors agree to this and there are no problems, but lately, there have been some investment firms who haven’t been the original investor. They purchase those contracts at year 13 or 14. Now, they’re poking holes in the agreements. They’re forcing some of these properties to go on the open market.

This federal program has been operating fairly quietly for a few decades. What’s so different now?

Most of these agreements go without a hitch. The nonprofit keeps the community together, and there’s no problem. What’s happened is these banks and insurance companies are selling off the interest to a second investor.

Those investors are not getting the tax credits, so they are thinking of ways in which they can maximize the money. The only way to do that is either to demand money from the nonprofit or the developer or to put it on the open market, which is what’s happening across the country.

Your investigation found that this shift is having an impact not just in Boston, and Los Angeles, but here in the Seattle area as well. Tell us a bit about the Ashwood Court Apartments in downtown Bellevue.

Ashwood Court is a lovely property. It’s a 51-unit low-income senior housing complex managed by a nonprofit called Downtown Action to Save Housing, known as DASH. We went into their garage and met with some of their seniors. They have this sharing shelf area. That’s where residents share food and home goods that maybe someone doesn’t want. They’re definitely low-income.

When DASH wanted to buy out that partnership at year 15 for nothing, Boston Financial Investment Management threatened to force the sale. DASH’s Executive Director Kim Loveall Price had to borrow $300,000 to make them go away. Here’s Kim recalling what it was like:

“I get emotional. We go down to the sharing shelves, right? Because I literally walked by them the day that I had to write that check. There was a half a jar of gravy, and a half a head of lettuce.”

You can just hear the emotion in her voice. What does the firm say about how it handled the Ashwood Court Apartments situation?

Boston Financial Chief Executive Gregory Voyentzie disputed Loveall Price’s version of events. He said the contract language didn’t provide a low-cost exit for the nonprofit, but he does regret that it was a disagreement and that it turned ugly. Here’s what he had to say:

“Hindsight? Looking back? Forget it. It’s not it’s not worth fighting over.”

What happened after that, though, is that DASH had to sue Boston Financial on several other properties. It won the case, but they also had to postpone fixing leaky roofs and rotting decks. So there was some impact.

A state commission here in Washington has flagged this as a problem. They’ve gone ahead to institute some new rules on investors transferring their interest in a housing property. What’s been the response to that?

The Washington State Housing Finance Commission issued a report in 2019 after several nonprofits had been involved in lawsuits. One, in particular, the Senior Housing Assistance Group, known as SHAG, lost a lawsuit and was forced to sell 10 properties for $250 million. The majority of that money went to investors, including one called Alden Torch, one of the biggest in this business, based in Denver.

The change in regulations is that the commission now requires their approval when an investor wants to transfer that interest. In response to those new regulations, Alden Torch is actually suing the agency and the commissioners, saying that they’ve exceeded their authority.

For people who are concerned about having affordable housing for families this year as well as 15 years from now, what’s the fix?

I’ll point out that this type of affordable housing must remain affordable for 15 years, regardless of who owns it, but who knows what’s going to happen after that? Many experts say Congress is the only place that can really fix this, but so far, we haven’t seen any legislation that really addresses the problem.